For those of you who didn’t know this, I have had the dream of opening up a children’s bookstore in Decatur for years. Unfortunately, with three crazy kids, doing this on my own is an impossibility at this time in my life. However, I believe that if I had a partner or partners to join me in this endeavor, a children’s bookstore in Decatur would thrive and be supported and embraced by the community.

So…I’m looking for a business partner (or partners), which is why I have emailed you. If there is anyone out there with a similar interest to be a small business owner, or if you know of anyone who might be, please let me know.

The shop next to The Inner Child is currently vacant. I have talked to the owner and manager of The Inner Child about the prospect, and they both believed it was a good idea and that the two stores could work together rather than be in direct competition. That space is ideal for two reasons- parking is good and the traffic is already there- people shopping for their kids. The space is very manageable for a small book shop and the rent and utilities are very reasonable as well. I also spoke with the former owner of The Final Touch, which if you remember, was a bookstore in Decatur several years ago. She commented that her strongest business was in kids’ books and that she felt that our city is the ideal place for a bookstore solely dedicated to children. I have already spoken with Decatur Downtown Development which has been actively seeking out a bookstore for the downtown area. Wouldn’t it be great if it could be a homegrown shop instead of a big chain?

Anyway, I have plenty of creative ideas as well, but right now I’m focusing on the more practical side of things. Please let me know if you are interested as well as your thoughts, comments, suggestions. Thanks-Diane

Some notes: The Inner Child was an excellent toy store located in the strip behind Cafe Lily. Final Touch was a wonderful bookstore that was located where Cafe Lily is now and later moved to the building that houses Little Shop of Stories and Starbucks.

2005    10:00 a.m. on Friday, July 1st – Little Shop of Stories opened! We were located at 515 North McDonough Street, right below Eddie’s Attic in the space currently occupied by Waffle House.

Diane and Dave worked pretty much from open to close every day of the week. We had two part-time employees. The very first person we hired was store manager Terra McVoy. She was the only one of us with bookstore experience and was perhaps the most awesome bookseller we ever had! Terra went on to become a big-time author! Terra no longer works at Little Shop but still runs two of our book groups (Kids & Companions and Page Turners).

2006     September 1-3 – The very first Decatur Book Festival was held over Labor Day weekend. Little Shop participated in all the children’s and teen programming which was held in a small tent with about 30 chairs on the lawn in front of the new courthouse. Within just a few years this annual event grew to be one of the largest in the country with over 300 authors and about 100,000 folks attending with dedicated children’s and teen stages that each held hundreds of book fans. 2008     April 25th – After moving our books and our shelves and everything else approximately 741 feet, Little Shop of Stories opened its current location at 133 East Court Square. This gave us A LOT more room for books.

August 7th – Little Shop hosted artist James Dean, creator of Pete the Cat, and author Eric Litwin They had recently self-published Pete the Cat: I Love My White Shoes. We believe that this was their first book presentation. James and Eric did such a phenomenal job that their book was picked up by HarperCollins and the number of titles grew and grew. Little Shop went on to host the book launch for their next three books. 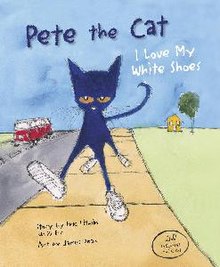 2009     August 16th – Krista became our store manager. Her imprint is all over Little Shop! Krista was the force behind the Decatur Christmas Tree Lighting, On The Same Page, Circle Time, My First Book Club, and all kinds of other things. Krista no longer works at Little Shop but still runs our the Catch All book group, our oldest continuing adult book club, which she founded..

December 3rd – Little Shop revived the Decatur Christmas Tree Lighting, putting it up on our roof. Here’s some information about how it was done. We continued to host this on our roof through 2017. In 2018 we worked with the City of Decatur and shifted the lighting with a bigger, fancier tree on the Plaza.

December 14th – Neil Gaiman came to Decatur!!! Little Shop of Stories had won the Graveyard Book Halloween Party Contest by throwing ONE CRAZY PARTY. Our prize: Neil Gaiman! The interest among his fans was insane. Over 1,000 people attended the event, which held at nearby Agnes Scott College. Perhaps we should have held it at the Braves stadium because we could probably have filled that. Neil was incredibly generous with his time, giving an awesome presentation and signing books until nearly 2 a.m.

One event like this can mean so much to a small, young independent bookstore. It really helped put us on the map. We will be forever grateful to Neil Gaiman.

2010    May 26th – Little Shop of Stories was presented with the prestigious Pannell Award from the Women’s National Book Association. The “Pannell Award recognizes bookstores that enhance their communities by bringing exceptional creativity to foster a love of reading and books in children and young adults.”

July 9th – Little Shop hosted Julie Andrews!, co-author of The Very Fairy Princess (and many, many other books). We’ve hosted a lot of great authors — before and since — but Julie Andrews was pretty darned special. 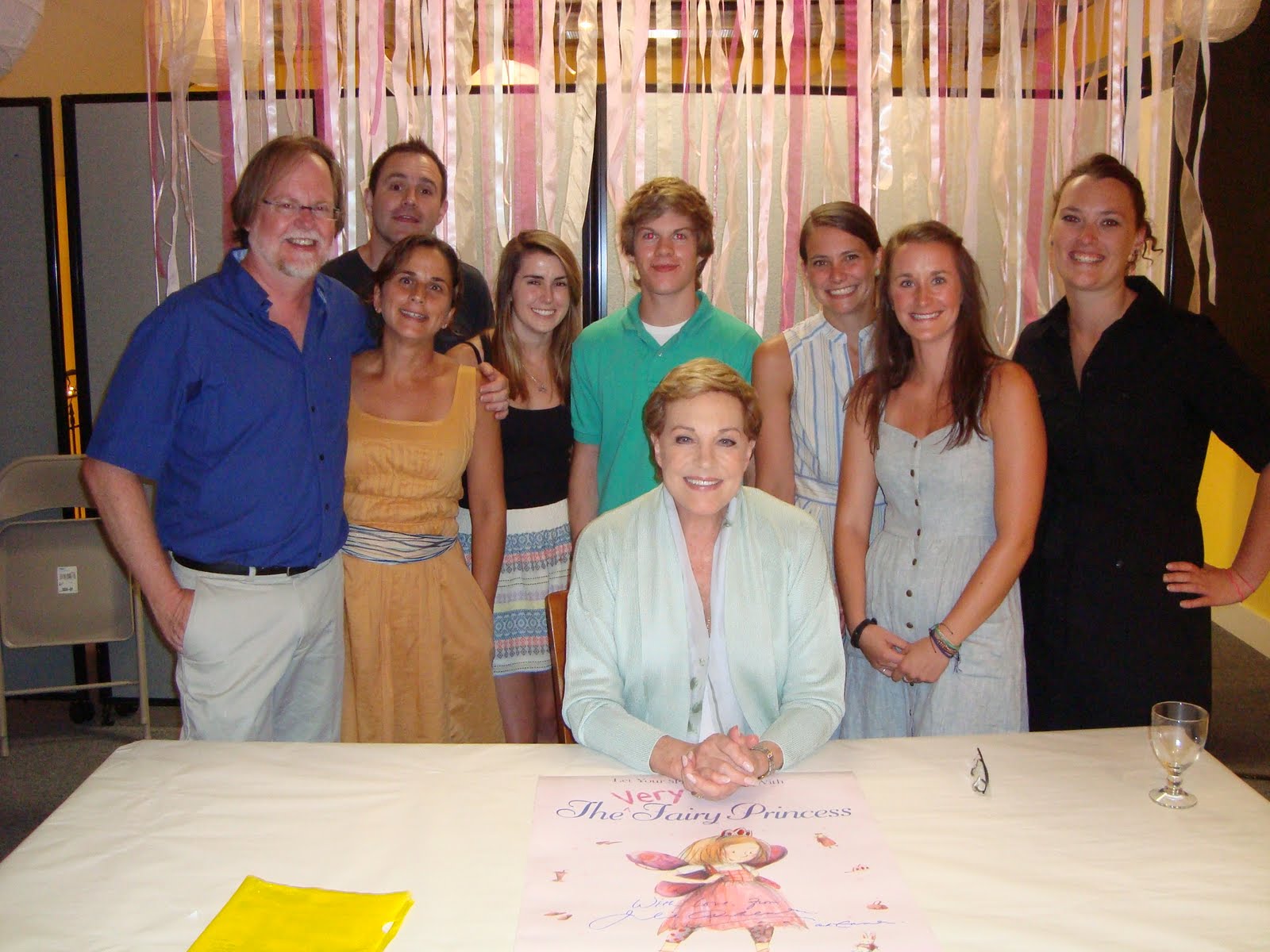 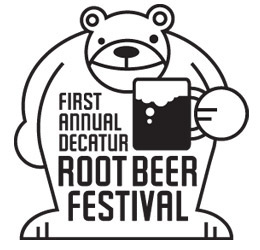 December 9th – On The Same Page, our community-wide reading program, made its debut with author Norton Juster. We helped him celebrate the 50th anniversary of the publication of his iconic middle-grade word play adventure, The Phantom Tollbooth. Joining Norton was author and children’s book historian extraordinaire Leonard Marcus. It was amazingly special. Marcy built a phantom tollbooth for the event and Norton Juster posed beside her! On The Same Page is one of our favorite annual events.

2014    February 21st – It was announced that Little Shop of Stories received a grant from James Patterson. The money was used to purchase an old short school bus and convert it into the Little Bus of Stories.

March 1st – We began to pave our penny floor. We’re still doing it. It’s a process!

November 1st – Kimberly Jones became our store manager. She was responsible for raising the profile of Little Shop. We started to become famous in Decatur. Then we became famous throughout the children’s literary world! Kimberly went on to become a big-time author. Kimberly no longer works at Little Shop but still runs our Well Read Black Girl (WRBG) book group.

2016    March 16th – Justin became our store manager. He still is! Ever wonder why everything seems to run so smooth at Little Shop? It’s Justin. I swear he can juggle 15 things at once. Have an issue with Little Shop? Contact Justin. Please.

October 26th – Following months of construction, Little Shop of Stories expanded into the adjoining space. This gave us A LOT more room for books.

2020    March 17th – Due to the evolving Covid-19 situation, Little Shop closed its doors to customers. Instead it took orders online, through email, and over the phone and offered free home delivery, curbside pickup, and shipping.

May 28th – Amid the heavy gravity of the times, a little lightness. For the second time, Little Shop of Stories was presented with the prestigious Pannell Award from the Women’s National Book Association. From the WNBA’s press release:

Justin Colussy-Estes, store manager, said, “We are thrilled that Little Shop of Stories has been awarded the 2020 WNBA Pannell Award. What a gift to be given right now. We have not had a customer in our store for two months. Our methods have had to change, but our mission has not: to foster empathy, creativity, and bravery in children through books. The children will return. The visits and the story times and the parties and the camps…they’ll be back. Until then, we wish love, safety, and hope to all of our readers and fellow booksellers. Thank you, thank you, thank you. Our hearts are full today.” Jurors lauded their mix of creativity and knowledge of just the right thing for each customer to help make readers out of their little ones.